Allen Carr was born into a working class family in London, England in 1934. An athlete and avid anti-smoker as a child, he started smoking while doing National Service in 1952. By the time he qualified as a Chartered Accountant in 1958, he was a chain smoker.

As Allen said in his biography: “On a bad day I smoked five packs, and never less than three.”

In addition to his chain smoking Allen was, by his own description, a ‘serial quitter’. He found quitting tough, but staying quit even tougher. “I once lasted six months of sheer hell before I caved in and lit up” he said. “I’m not ashamed to admit that I cried like a baby. I was crying because I felt I was condemned to smoke for the rest of my life.”

Shortly after this traumatic incident, a combination of events led to what he described as “my Eureka! moment”.

“I realized that it wasn’t a weakness in me, or that the cigarette was so wonderful that I couldn’t live without it, but that my brain had become scammed into seeing the relief of withdrawal pangs as genuine pleasure or stress relief. I realized that the reason I smoked was to remove the symptoms of withdrawal and by so doing, I got to feel like a non-smoker for a few minutes. As soon as I understood this simple point, my desire to smoke disappeared and I have never smoked since. After years of struggle, quitting was truly effortless and, if I’m honest, extremely enjoyable.”

Allen began helping smokers at his London home and soon word spread of his success; he had to expand to cope with the demand. Allen Carr founded his first stop smoking center in Wimbledon, England in 1983 and spent the next 25 years of his life teaching smokers how to quit easily using his simple, drug-free approach.

In 1998, he was invited to speak at the 10th World Conference on Tobacco & Health; the first non-medically qualified person ever to receive such an honor.

I (Natalie) was fortunate enough to meet Allen Carr in the summer of 2006. It was at the Allen Carr conference in the UK, an annual gathering of like minded people, all trying to cure the world of smoking, one smoker at a time.

I don’t mind admitting I was incredibly nervous about meeting him, after all, this man's method had quite literally saved my life. Having attended his quit smoking seminar in June 2003, quitting smoking had been ridiculously easy and as Allen said himself, even enjoyable. 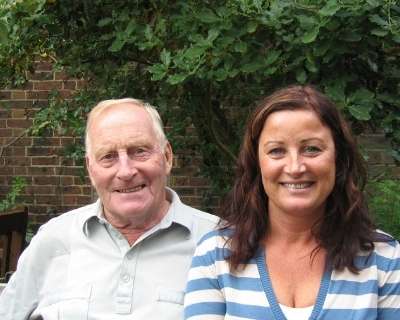 I introduced myself and we chatted about the usual stuff; the weather, the English summer (it happened to be lovely that day), my involvement in taking the program to Australia but mainly I just wanted to say thank you, thank you, thank you from the bottom of my heart. I actually got quite emotional and had to hold myself back from crying tears of joy and relief.

Even today, writing this eighteen years later, I still get emotional and close to tears about how life could have been so different if I hadn’t taken action and attended the seminar back then.

He was very kind and took a genuine interest in my story and actually seemed quite humbled that someone from Australia had traveled all the way to England to meet him, just to thank him in person.

Sadly, a month later Allen was diagnosed with inoperable lung cancer and on 29th November 2006, he died peacefully in his sleep.

Shortly before his death Allen also remarked “Since I smoked my final cigarette, 23 years ago, I have been the happiest man in the world, I still feel the same way today”.

Thousands of messages from grateful ex-smokers flooded in and major media, including the BBC, the New York Times, The Economist, Washington Post, Forbes, the British Medical Journal, the New England Journal of Medicine and the Harvard Medical Review, published his obituary.

The Economist said it best. Their headline read: “Allen Carr: Saviour of smokers”

Today the organization has spread through word of mouth and is now recognized as the world’s leading authority on addiction. Today there are more than 150 Allen Carr’s Easyway seminar locations in 50 countries, all run by former smokers who quit smoking easily using Allen Carr’s Easyway and I’m extremely proud and grateful to be a part of that team.

Nothing beats being in the same room with an Allen Carr expert facilitator but the book, a lighter version based on the seminar program, enables anyone to access his method from every corner of the world.

Subsequent publications have applied the same simple logic to alcohol, drugs, weight-loss, caffeine, sugar, gambling, debt and fear of flying, so wherever you are in the world and whatever you need help with, there’s an Allen Carr program that can help you find your freedom too.

Take our quit smoking quiz; the answers might surprise you!